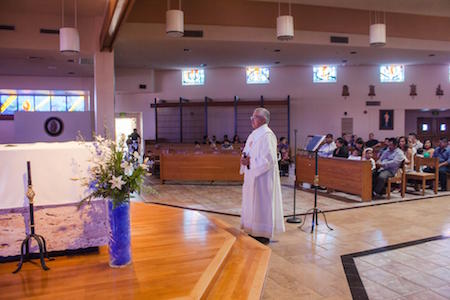 USCIS has developed a non-immigrant visa type, the R-1 visa, specifically for religious workers and ministers who have been hired or are being sponsored by non-profit US organizations to work here in the United States. The U.S. employer serves as the petitioner on behalf of the religious worker, and both must provide certain documentation in accordance with eligibility criteria developed by USCIS. As the petitioner develops his petition, he should contact an immigration lawyer and discuss both the petition and the accompanying paperwork.

1. The R-1 is for Ordained Ministers and Trained Religious Professionals

In order to be eligible for the R-1 visa, the beneficiary (the religious worker or minister) must have been hired for at least a part-time position that requires his specific religious skill set. USCIS defines a part-time position as working at least 20 hours a week. The R-1 visa is not available to those who wish to come to the U.S. for the sole purpose of studying at a religious institution or seminary. That said, religious workers are allowed to complement their work with continued study.

2. There is a Specific Eligibility Criteria for the R-1 Visa

A religious worker must fulfill the following criteria to be eligible for the R-1 visa. An immigration lawyer will be instrumental in determining how to best demonstrate one’s eligibility, and should be consulted during this process. The criteria are as follows:

Similarly, the US organization employing a religious worker must offer the following:

As before, if the petitioner has any questions regarding what can be used to fulfill these eligibility requires and to demonstrate the situations described in these criteria, he should contact his immigration lawyer and discuss the criteria and his organization’s eligibility. Without aid, the petition process can be complicated; an immigration attorney will ensure that the petition is smoothly and accurately completed and filed.

3. If You Qualify, So Do Your Dependents

If the beneficiary has dependents (a spouse or children under 21) who would like to accompany them to the U.S., they may be eligible to apply for the R-2 visa. The services of an immigration lawyer will also be irreplaceable as the petitioner and beneficiary prepare a file for the beneficiary’s dependents.

If the beneficiary’s dependents do receive R-2 visas, they will not be eligible to work in the United States, and they cannot apply for employment authorization.

The initial length of time of a R-1 visa is 30 months, or 2.5 years, and an extension of up to another 30 months can be requested (bringing the maximum to 5 years). If the beneficiary resides abroad and either 1) is physically absent from the U.S. for one year or 2) only works seasonally in the U.S., this five-year limit will not apply. If the beneficiary decides to immigrate to the United States, he will need to file an immigrant workers petition for an EB-4 visa. This process will also utilize the services of an immigration attorney.

5. An Immigration Lawyer Can Make Your R-1 Process Much Easier

The R-1 visa has been developed to assist religious workers wishing to come abroad; both potential beneficiaries and potential petitioners should consult an immigration lawyer to discuss their options, eligibility, and the possibility of bringing family members of religious workers to the United States.